In order to help me along with my goal of not buying any lipsticks this year, I, of course, have to shop my own stash a little. I wanted to wear more of the lipsticks down below and for some of them, also figure out if I like them enough against my other offerings before I decide to de-stash them. It’s also a fast chance to review ones I’ve never mentioned here before…

Without further ado, these are the lipsticks in rotation this month!

This is sheer nude pink shimmer. I do like it, and it’s very pretty, but since I normally want noticeable colour, I just don’t reach for it a lot. I have a feeling this might be one of the first lipsticks to go but it might be worth experimenting with lip liners underneath. Maybe.

I actually quite like this for its rather long wear and cheap price (£2.99 on Amazon as an add-on item!). I bought this particular shade because it’s an apparent dupe for MAC’s Velvet Teddy and I wasn’t sure how that would suit me. The plastic packaging also quickly got shattered after that holiday to Vietnam in my travel bag. I didn’t even wear it there much after discovering how much they love reds over there!

I wouldn’t repurchase this colour as I think it’s just a smidgen too light for my personal taste (although it doesn’t wash me out), but I’d consider similar darker shade like In The Flesh another time. Or maybe I should look for similar shades in less breakable packaging… Or maybe I just shouldn’t travel with it!

My favourite way to wear this shade is actually with a layer of NYX’s Butter Gloss in Praline on top for a lovely glossy nude lip, which is why it has joined my rotation. It’s also great on top of a muted red liner like Rimmel’s 1000 Kisses in Spice or Kiko Smart lipliner 103.

I like this but haven’t been reaching for it much recently. It’s a mauve nude with a satin finish. I don’t think I’ll repurchase it once it’s used up, though. Sometimes I also like to layer it with Rimmel’s 1000 Kisses Lipliner in Spice which is clearly my go-to to warm up a lip colour. 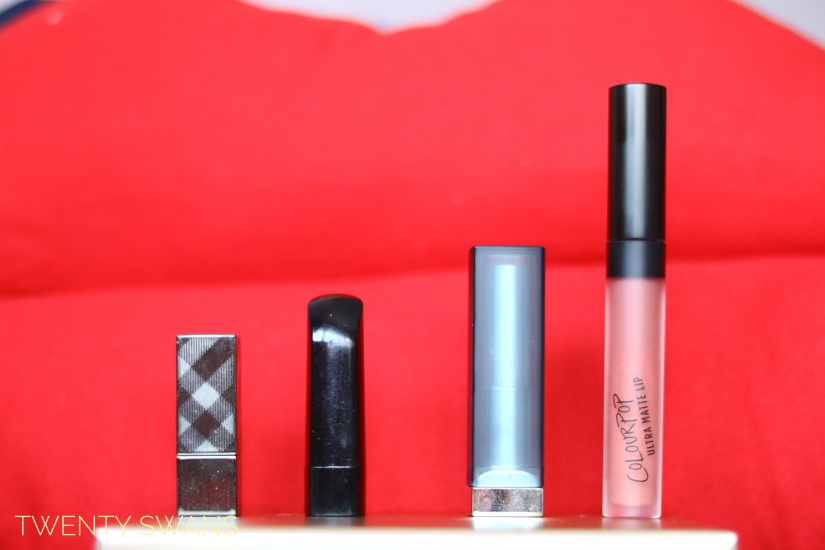 I LOVE this but haven’t been reaching for it much, probably as it’s so precious. It’s a brown with a hint of pink, and it’s not too sheer on me (unlike Rikugien) and can also be built up, making it a fabulous nude MLBB shade. In true Burberry fashion, even their casing and bullet are plaid patterned. I think this particular line of satin shades was discontinued, but from what I’ve seen of the Lip Velvet bullets, they still seem vaguely similar (they also have a Rosewood shade!) So I might check them out in future.

I got this as a mini from my mom. In fact, I think this is the oldest lipstick of the lot and it shows as it has the biggest dent out of my stash. I am hoping to finally finish it up this month or next… This is a classy, rosy pink that isn’t super opaque but can be built up well. It has a satin finish and is so comfortable to wear. I’ve had no problem reaching for this daily, and I’m not a girl who wears the same lipstick two days in a row! In fact, if it weren’t for the rapid expansion of my lipstick stash it would probably have been finished all those years ago…

This is a cool brown shade and is true to its name in that it’s super creamy. This actually hasn’t had more than a couple of wears since its review last year, so it simply needs a bit more love. I particularly wanted to try it out with different coloured lip liners, and I really like it over MaxFactor’s lipliner in Red Rush for that extra red tone. It’s quite opaque so I couldn’t apply too much and lose that tone, though.

This is a medium mauve toned lipstick that I find best described as a lighter version of the infamous Tulle shade from the original line of Ultra Matte lipsticks. It’s not the most flattering on me, though. This is another one that I want to experiment mixing with a coloured lipliner but Colourpop’s colours are so opaque I wonder if it would work. Maybe a lip topper? I’m not sure if this is still available on their site as it was from their Christmas collection in 2015. 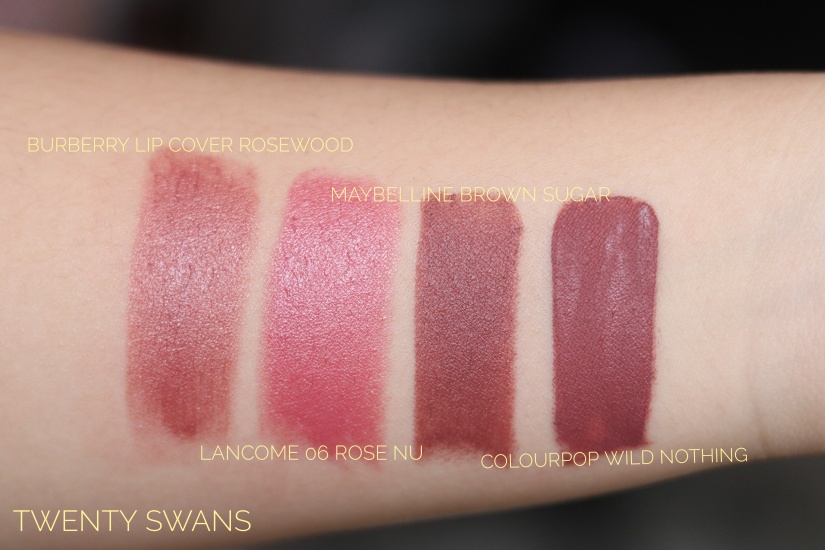 I realised as I took swatch photos that all of these picks are neutrals in one way or another! Although Rose Nu is stretching it a bit towards the pink side, it’s still a great choice that suits anything. I think it just goes to show what a wide range of shades neutrals can encompass. On top of that, only two of these shades have separate reviews because beyond what I’ve said here, as I’ve not had much to say about these shades!