March 16, 2018March 15, 2018 Swanna
Hi everyone!
A few weeks ago, I attempted some photos in the sporadic Golden Hour lighting to showcase the items but the weather was not playing nice! One moment it was sunny and I managed one photo before it vanished again and I would tweet a complaint and it would be sunny and so on…
But just yesterday, the sun was out, and it was out for like, an hour (?????) and I got SO many photos taken and oh my gawd, it felt so good and productive and it’s really upped my mood. I was running around so fast with a mental checklist of blog posts that needed photos and as a result, I’m almost set until next month, thank goodness. I didn’t completely finish my checklist and accidentally missed a few important ones, but that’s okay! I can do those next time! PHEW – I was almost about to cut my schedule to once a week!
THANK YOU SPRING, MY NAMESAKE. THANK YOU.
I’ve also switched out of my winter coat for my lighter jacket, and when I stepped out to do the bins in my shorts, I didn’t freeze! This winter felt so bloody long and I’ve never been happier to feel it finally ending.

Anyway, I am enjoying the idea of writing about a lipstick that fell by the wayside of my stash, so to speak. Last month I featured Clinique’s Pop Lip in Cherry Pop after wearing it for almost half the month. I already loved that lipstick but hadn’t really been wearing it often. On the other hand, with today’s featured lipstick, it’s a little different. I only began to fully appreciate it recently.

I actually first received this as a Christmas present from Tray, years ago. Then months later I ended up with two because Q bought me one as well! I think I ended up giving one away as I no longer have two in my stash. But at the time, this must have been a very ‘me’ kind of shade because I was experimenting in sixth form with a limited selection of bright colours. 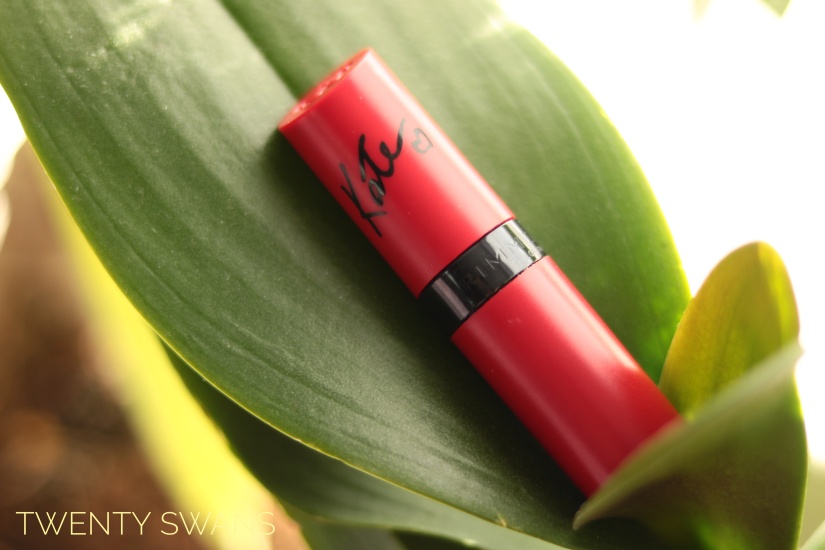 This lipstick will only set you back £4.99. It’s from Rimmel London’s Lasting Finish range, but more specifically from the Kate Moss Mattes, which all come in red tubes. This is the same range that spawned the infamous shade 107, popularised by… Zoella, I think it was. I do have that shade, too, but we may not see it in rotation for a little while longer.

As you may know, Rimmel’s Lasting Finish range is full of really nice lipsticks at a great price. This one’s really nicely pigmented although not thick or fully opaque as you can see from the swatch below, and it’s very smooth and soft on the lips. It wears quite decently by itself and doesn’t bleed too much or ‘crack’ after many hours, and it’s pleasant enough to reapply. It’s not too drying, either. The only big gripe I have about these lipsticks is the smell which isn’t exactly appealing but easy enough to get used to – it’s not strong. It also tends to taste as it smells, if that makes sense. 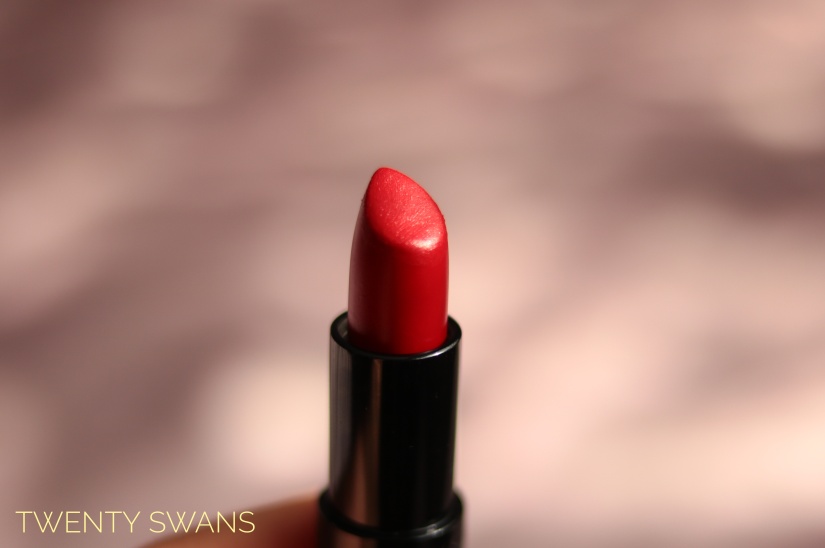 The reason I wasn’t as into this shade before was that it always seemed a little orangey to me when I believed that orange tones didn’t suit me. It is definitely a true red without a noticeable blue tone. It contrasts a bit more with my cooler purple hair at this point in time but overall gives a confident, summery look.

I thought for a moment of changing my planned April rotation so that they were ALL bright shades instead of waiting until May to start doing it. However, I do have some nice spring pinks that I want to use as well, so I changed my mind again. The temptation to break out of rotation these days is very strong! Especially when there is a shade I never reach for or one that I tend to reach for too much. But that’s the whole point of this challenge – to figure out what I truly love and what should be tossed without fail.

Anyway. I’m not sure how scheduled posting will be for the time being because I have an assignment to be finishing for next week, but at least I have some photos to work with when I need a break from reading academic journals.

Days since I last bought lipstick: 80