Imagine, y’all. On a regular day scrolling Instagram, I came across this.

Seoul, we're coming for you! Join @badgalriri and #FENTYBEAUTY Global Makeup Artists, @priscillaono and @artbyhector, for a beauty and artistry talk! Tickets go on sale August 7th at 9am KST: http://www.globalinterpark.com/detail/edetail?prdNo=19011233

[In case the link doesn’t work, it’s the promo post for Fenty Beauty’s Artistry and Beauty Talk with Rihanna]

“Rihanna is going to be in Seoul. I’m in Seoul at the same time! This is FATE.“

So I tried to buy tickets on the day through my phone before getting confused at the missing web page and realising two days later that the website doesn’t load properly on phones. I snagged a ticket at the back of the venue, but I’m not mad about that at all and it was a lesson learned. Then I got caught up in the panic of moving countries, and here we are.

🥰 so proud to say that @fentybeauty is NOW available at Tmall Global, and in Hong Kong & Macau at T Galleria by @dfsofficial, @sephorahk, @harveynicholshk, @beautybazaarhk, and @beautyavenuehk. In Seoul, you can find us in Duty Free locations at @lottedutyfree, @shinsegaedutyfree, and in Jeju at the @shilladfs_en!! Can’t wait to see your beautiful faces on Sept 17th at the beauty and artistry talk with #fentybeauty Global Makeup Artists @priscillaono and @artbyhector!

In that panic, I didn’t bring over any eyeshadow palettes. This was also fine, as I didn’t wear much in the way of makeup due to the humidity and plain heat. I also knew I’d be making a fair few beauty purchases whilst in Seoul. But this is Rihanna, so I felt that I had to make a big effort to be worthy of being in her presence.

Things didn’t go to plan though. I had three lectures that day, and had to zip off right after my last one to get there in good time. I had to make a compromise between university casual and event formal. Since I had only tees, I ended up wearing my nerdy Hunter X Hunter t-shirt from the Uniqlo X Shounen Jump collection, dressed up in my favourite royal blue skirt and pale pink Buffalos. Most people came looking STUNNINGly dressed to the nines, although there were a fair number of casually dressed guests too. Despite that, I still felt a little out of place.

Here’s my makeup look for the Fenty Beauty event! It’s my shame to admit I STILL didn’t own a Fenty Beauty product as it just hasn’t been a priority over the last year or so. Especially when my makeup is leaning on the more natural side these days. I decided on my regular style of makeup with a solid attempt at sharp eyeliner with a gel pencil. 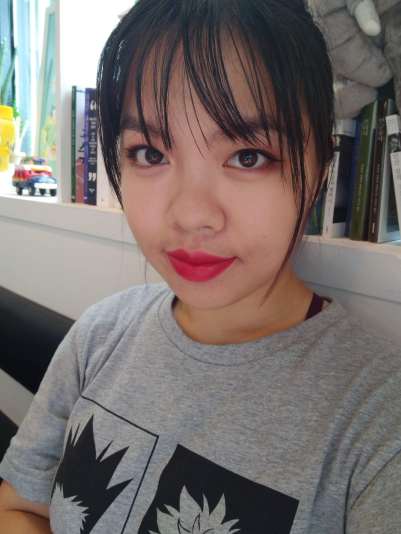 My outfit was already fairly bold so I didn’t want to go too out there with the makeup.

I documented as much of the event as I could on my Instagram Stories, which is now a featured highlight on my profile, @Swanzig_X but I will tell you all about it here as well.

I didn’t realise how big the Lotte World was, with a Mall, a Tower, just floors and floors of STUFF to do and shop. I was so worried that I might be late just by being lost. When I finally got there and checked my bag in, I was able to take some shots at the black carpet, look at the product stands, and snack on the food and drink the waiters were bringing around. It felt so classy and was partially why I felt so out of place. We were not permitted larger cameras so I couldn’t get better quality photos with my DSLR.

Amongst the hustle and bustle, I saw a K-Beauty Youtuber! I watch a bit of Lamuqe from time to time and I was honoured to meet her and get a photo with her. She is stunning with her makeup on point IRL too, and I loved the thigh-high boots she wore. Meanwhile, my makeup and fringe were clearly reaching their limits.

Then, after two hours of hanging out and waiting we were allowed to go into the giant Cinema area to put our feet up. Rihanna, at the time, was stuck in traffic hence the really late start to the event. In fact, she was doing an Instagram Live whilst in the car!! As expected, her makeup looked flawless at the event despite having it on throughout the entire car ride.

The event finally started at around half 7 if I remember right. I was kind of overwhelmed at this point by everything. My booked seat was originally right at the back of the cinema but at the encouragement of the staff we were allowed to move forward to fill closer vacant seats, and I got a great seat almost right in the middle of the audience area.

Rihanna showed so much enthusiasm for her brand – she was so excited to show us her favourites and so eager to hop in and do some makeup on the models herself, too! It felt informal, but also professional. When talking about her makeup she was so bubbly and fun but when it came to answering questions she was so serious and you can tell that she really meant business about the direction of her brand and message it sends. She even asked for beauty tips from the Korean audience!

I have no other words, but I love her and respect her so much. She also encourages and uplifts the people she works with, too, and did this throughout the event. She complimented every Fenty Face!

The love was also returned where guests voiced their troubles of struggling to find good shades as people of darker skin colour, especially in Korea where most makeup is three light shades and not much more. A 50-foundation-shades brand is truly groundbreaking here, and Fenty Beauty insisted on bringing the entire shade range to Korea. Rihanna also said that it’s important for them to be able to reach the consumer and they want it to be more widely available and they want to keep expanding globally.

When asked about choosing models for the brand, she said she is very picky, but she doesn’t care about following on Insta or any of the sort. Simply put, there is a chance for anyone to be a Fenty Muse. Not sure how you’d go about putting yourself out there though!

Here are some of the makeup tips that we learned during the event!

Also, when asked about her skincare routine, she hinted that Fenty Skin is in the works!

At the end, she said she had something special for Korea, where the highlighter Diamond Bomb sold incredibly well as the brand’s most popular product there. She then showed us a video of two NEW products from the brand – a Diamond Bomb II, and a new liquid highlighter! Released in Korea on the night (17th September) and available to the rest of the world on the 20th! The announcement came complete with confetti.

We gettin' blinged TF OWT💎✨! Meet Diamond Bomb II, a new diamond-dusted holographic pink sparkle that’ll have your face and body looking veiled in peachy-pink crystals! Y'all ready to glow up from the toe up? Get it when it drops on September 20 at fentybeauty.com, @sephora, @harveynichols, @bootsuk, and #SephorainJCP! #DIAMONDBOMBII

Rollin' up lookin' like wealth! Get ready to bring your shine on-the-go with our Liquid Diamond Bomb – a new roll-on liquid 3D glitter to highlight ya life in a show-stopping sparkle for your face and body. Snag a cute Baby Buki brush, too, for you to get that even glittery glow! Pick it up on September 20 for a limited time only at fentybeauty.com, @sephora, @harveynichols, @bootsuk, and #SephorainJCP! #LIQUIDDIAMONDBOMB

This is sadly where she ended the event. I was still buzzing and updating my Stories while everyone left the room, but on the way out I was surprised to receive a goodie bag with the new products!!! No one else has this stuff yet!! I’m bewildered and honoured. They’re my first Fenty products and I cannot wait to try them. I will be first to admit I am not a huge highlighter user but I am ready to try them to see why they are SO loved here in South Korea.

Thus ends my summary of the event! I tried to add as many details as I could, and I hope you learned something as well! After I post this, I will get to work on playing with the new products as much as I can and will hopefully get a review out a little after the worldwide launch on the 20th September!