Hello everyone! It’s been a while. I hope you’re all well and staying healthy.

As for me, I’m finally reaching the end of a 3 month winter break, the result of extensions due to the coronavirus. In February, my boyfriend flew over to see me so we could celebrate lots of things together, like our anniversary and my birthday. Thanks to him, I felt less lonely and also didn’t miss home so much anymore.

When the camera can't focus on us both due to the sheer height difference . . . . . . #happyvalentinesday❤️

Even though the situation wasn’t so bad then, we did downscale our plans to avoid some of the more super-touristy or just plain unhygienic-sounding activities, like the overnight sauna, but we still had a great time. We played a lot of The Legend of Zelda: Breath of the Wild together where he did the fighting and I cooked food for Link, watched anime, and drank a lot of banana milk.

Me: man I don't like this area, bad gut feeling
Ras: I killed all the lizards
Me: Nah worse than that

Within days of him leaving Korea, the coronavirus situation began to escalate harshly in Daegu. (Unrelated, but on the same day, Italy recorded the first of a cluster of cases in Lombardy.)

Seoul hasn’t been too deeply affected by the coronavirus outbreak – it’s on the other side of the country to Daegu where over 90% of cases are. As I finish this post though, there are about 200 cases in Seoul. (It had been about 100 up until a recent call center outbreak in the city.)

However, tourist areas like Myeongdong and Insadong have been surreally empty. Most cafes and restaurants remain open, but with much-reduced traffic. The few times I was on the subway, I could easily grab a seat, which is new. Even rush hour was not so bad.

People are very slowly trickling out onto the local streets again, but I feel that’s partly because the schools are finally starting up again. Schools and universities, including mine, have delayed start times and universities are starting the semester with online classes as a precaution. My online classes start next week. I am expected to show my face and contribute to them via webcam.

(Apparently, sales of Nintendo Switch and PS4 have gone up recently, which doesn’t surprise me. Staying at home gets pretty boring quite quickly, and I was almost relieved when my friend reminded me I had work to do from my home university! I played through a few seasons of Stardew Valley and ended up buying and playing through quite a few more games myself. The only thing that would have made it better is if the release date for Animal Crossing was a bit earlier…)

All large gatherings and events have been canceled, including concerts and festivals. The weekly music shows have been recording without audiences since February. (I was supposed to be going to a few shows to see LOONA and all the promoting groups during this time, and got tourist tickets for SBS The Show only to be refunded later on.)

For a time, I wasn’t going out so much either, but as I’ve gone out a few times I’ve become less anxious. Plus, my goshiwon room, not much larger than my bathroom at home, is not the ideal place to be holed up for days. I feel this might be the other reason why people are slowly going out more – the living spaces often aren’t ideal to be indoors all the time, especially for mental health.

My parents took to calling me every couple of days at first, and at one point wanted me to return home to evade the spread of the virus – despite the fact that I would have to return anyway to complete my studies. I don’t think being on a plane is a good idea at the moment, too. Funny that airlines are deciding to spray down their planes with disinfectant more often now when they should have been doing that more often anyway. 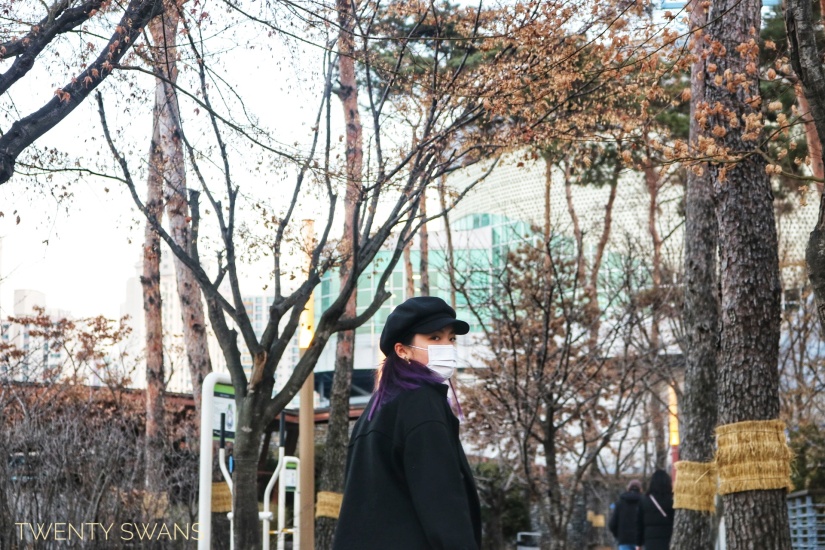 My friends from the US have had to fly home early due to the raised alert levels. I really hope that I don’t have to go home. The uncertainty makes me nervous. From a personal perspective, this was supposed to be my dream year in Seoul. Ticked off my bucket list. My ‘I made it’ moment. I wasn’t expecting to fall in love with the city so much, too. I think having to go home early would actually break my heart for some time.

I was thinking that I might not return for a while after my placement year due to financial reasons. Now, I know for sure that I want to return soon just to be able to fill in the gaps in experience I wasn’t able to achieve this year because it looks like I won’t be able to visit Busan, Daegu or go out to Japan. Or rather I could, but I don’t feel super comfortable with the idea nor do I have adequate time (at the moment, travelers to Japan and Vietnam from South Korea must be quarantined for 14 days after arrival).

The other thing is, I’ve read about the stories of racism against anybody passing for Chinese or otherwise East Asian in the UK, and frankly, I am horrified. It doesn’t sound like the country I grew up in, even though I have experienced racism at home in the past – it’s as if suddenly everyone has a pass to be racist recently. My mom has been called ‘Wuhan’ with more clients suddenly concerned if she’s Chinese at her workplace (which she isn’t and why would that even matter) and my sister has been called ‘coronavirus’ on the way home from school (and catcalled in the same breath, too??). Hearing these stories makes me feel so freaking angry but even makes me afraid to return home to some extent.

It’s funny to be reading stories about not being able to buy things due to panic-buying when I feel that the situation is still relatively calm in Seoul. Or perhaps I just missed the panic-buying period. I can tell you that my local grocery stores are still pretty well stocked, and people are just going out as needed when they have to buy things. I did notice a long queue at the pharmacy next door today, presumably, for masks – those are the toughest to buy at the moment. Masks may or may not help that much in reducing spread, but it’s considered a cultural norm here to wear masks in the winter or when ill, and in this current situation it also helps for personal and social peace of mind.

On a slight side note, I am seeing lots of joke tweets about flying places right now because flights are so cheap, because YOLO and so on, and I am really hoping nobody is actually trying to travel right now. As many other people have pointed out, whilst you may not catch it (or you may even catch it and survive due to being young and healthy) the issue is that you might spread it to someone else who is more vulnerable. This isn’t just about the people you do know – it was serious even when it was affecting people you didn’t know.

It’s socially irresponsible. End of. Stop screwing people over for your holiday.

Anyway. So that was just me venting out some anxious thoughts and so on, which I feel I really needed. While I like to think I’ve been pretty calm about the whole thing, writing this post was difficult and I realised I’ve been much more anxious about it than I thought. I think the conflict between my rational and irrational thoughts are causing even more anxiety. When people have been asking me how I’ve been doing, I’ve been bottling up a lot of my feelings and summarising this rant into two sentence replies for them. So I hope this is a better idea of how I’m doing.

Once again, stay healthy everyone. Better safe than sorry.

P.S Other interesting articles about life in Korea right now:

South Korea’s ‘trace, test and treat’ approach by Laura Bicker for the BBC

Vietnamese curator dropped because of coronavirus prejudice in the Guardian